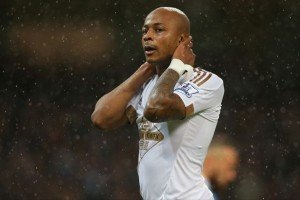 David Moyes has confirmed Swansea have lodged a formal bid for Hammer Andre Ayew, but insisted West Ham must bring in replacements before any sale can take place tomorrow on deadline day.

Swansea City has offered West Ham £16m plus a further £2m of add-ons for Ayew. The Hammers rejected an initial offer of a loan for the remainder of the season and an option to buy of £14m earlier this month, and the Welsh club has now returned with a second bid worth £16m plus add-ons.

“We have had a bid from Swansea and we are considering it,”  David Moyes told reporters at a post-match conference. “But we need to get players in and until we get players in I am not able to make any decision.”

West Ham paid Swansea City a total £21.7m in total including add-ons for Ayew in 2016 so stand to make almost a £4m loss if the deal goes through.