David Moyes has confirmed that West Ham are set to give Lukasz Fabianski a new contract.

The Hammers goalkeeper has been in excellent form throughout the season, playing in all but one of the club’s Premier League games at the age of 36. 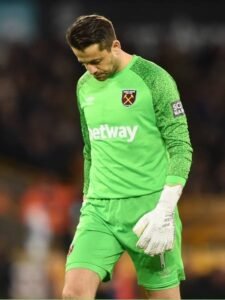 He remains the number one choice ahead of loan signing Alphonse Areola, who has been limited to playing in the cup competitions.

Fabianski is set to turn 37 this month but Moyes has now confirmed that he will be offered a new deal that will see him play for the club through next season too.

Quoted by the Daily Mail, Moyes said: “Lukasz has played really well this year and we will be keeping him next year – of course we will. I think maybe the age Lukasz is at, we have tried to spare him.”

Fabianski has been with the Irons since 2018 and is a former Hammer of the Year; he has made a total of 131 appearances for the club ahead of the clash with Everton and has kept 33 clean sheets.

A safe pair of hands, he will be sticking around for a while longer.

← Everything you need to know: West Ham v Everton
Hammers target at centre of £60m deal →
Click Here for Comments >