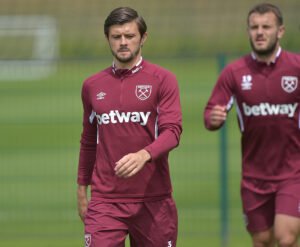 David Moyes’ admiration for Aaron Cresswell is one of the worst kept secrets within the club.

And there’s no doubt that the cockney scouser has benefitted enormously from working with a boss who knows exactly how to use his strengths.

The manager has already openly declared he believes international caps could still be on his way for the 30 year old.

And talking to reporters who gave an insight into the relationship he has with the left back who has been on fire for much of the campaign.

He said: “I was joking with him the other day and said, ‘You’ve had more assists in one season than the rest of your career’.

His delivery has been excellent. It’s okay  having a good delivery but you need someone at the other end to put their head on the end of it.

I think Cressy is enjoying it as well and I can tell by his reaction. He knows it’s an important part and when you look at the other players who also get assists, you’d have to say his assist record this season has been stunning.

Hopefully there’s a few more to come before the end of the season. “