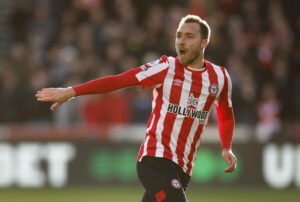 David Moyes could well be involved in the race for Christian Eriksen with no word from Brentford regarding the midfielder’s future.

It’s been reported that manager Thomas Frank has offered him a new deal but the outstanding midfielder is weighing his options before giving a response.

The former Tottenham player returned to the Premier League when his fellow Dane, Frank learned that he had recovered from a cardiac arrest which saw him collapse in an international game between the Danes and Finland.

We were told by London Stadium sources that Frank had become aware of Eriksen’s recovery ahead of the January window given their relationship and thus stole a march on us and other clubs in signing him  to a short term deal until the end of last season.

Moyes would certainly be interested in doing a deal but there is interest from Spurs  which would give him the chance of Champions League football.