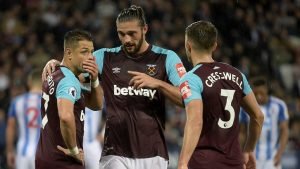 Andy Carroll’s future lies entirely in the hands of manager David Moyes once the Irons have secured their Premier League status.

There’s now little doubt that the 54 year old Scot will agree a new longer term deal once all is well on the survival front but Carroll’s involvement in the club is now very much in question.

Once he is again fit,  Moyes will have to make the decision on whether bids are entertained or whether he is an asset that must somehow has to be kept as fit as possible for the final year of his contract.

The club would be ready to sell and would look for £10 million although would settle for £5 million up front and the remainder over the period of his new contract elsewhere.

It became clear over the last year that  the club were ready to sell when Chonese clubs Tianjin Quanjian, Hebei China Fortune and Shandong Luneng showed an interest this time last year.

But it will be Moysie’s decision and having developed a twin partnership of Arnie and Manu he could easily choose to try offloading a guy on wages of £80k a week plus.

We are heading into an interesting summer!