David Moyes has warned his West Ham side that the Europa League will be a completely different competition after Christmas!

The Hammers are set to face Rapid Vienna on Thursday night and a win would ensure that the club top the group and head into the knockout stages with their heads held high. 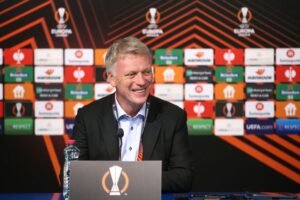 Finishing top would see the Hammers sail straight through to the knockout stages, while a second-placed finish would guarantee a meeting with a club that has dropped out of the Champions League.

Borussia Dortmund, the German giants, were knocked out of the Champions League earlier this week, while there is also the potential of Barcelona dropping into the Europa League.

If the Hammers are to win the competition, they will likely have to play one such side and Moyes is well aware of just how difficult the tournament will become when the big hitters come into the fray.

Quoted by the London Evening Standard, Moyes said: “The competition is really exciting at the moment. We couldn’t wait for the draw, to see who we got, and I have to say the players have taken to it really well.

“Everybody talks about us being one of the favourites but when you see the Champions League clubs, I watched the games last night, looking at the teams who could finish third and drop into the Europa League, it becomes a completely different competition.”