Moyes gets away with it – report 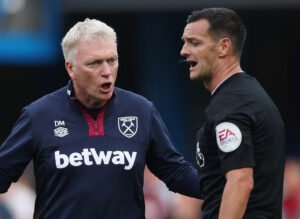 David Moyes  – having lambasted the decision to disallow Maxwel Cornet’s goal against Chelsea – will not be charged as a result of his remarks.

The furious Hammers boss described the decision as absolute scandalous and there being no reason for the goal to be chalked off in the last seconds of the game.

Such was the overall ferocity of his remarks, and that he confronted the ref at the end of the game, he might have well expected to have been punished as a result.

He may well have been helped by so many others coming out and  saying that it was an utterly disgusting decision with  Chelsea goalkeeper Mendy going down ahead of Jarrod Bowen doing all he could to avoid him.

The Times reported that no action would be taken as it had been decided the the comments he had made did not reach the threshold required for disciplinary action.

5 comments on “Moyes gets away with it – report”