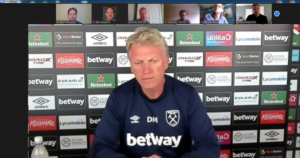 David Moyes has all but confirmed Claret and Hugh’s story that Haller faces a late fitness test as to whether he will be included in tomorrow’s matchday squad to face Burnley at the London Stadium but Felipe Anderson is out of contention and will not feature.

The manager told reporters via a Zoom pre-match press conference video call  “Sebastien Haller is doing better, we will see how he is once we finish today. He is getting closer. Whether he is ready to play is a different thing. Felipe Anderson won’t be available for the game.”

Claret and Hugh understand Haller has actually suffered from two minor injuries to his hip and his groin that has kept him out of the matchday squad for four games but he trained on Friday and again yesterday as he approaches a return to the matchday squad.

Suggestions that his absence has been linked to a contract dispute with Frankfurt and/or reaching a 30 appearance threshold triggering a payment have been described as nonsense by club insiders.

One comment on “Moyes gives Haller and Anderson update”