David Moyes was left gutted at the way West Ham conceded the goal that granted Sevilla a 1-0 victory over the Hammers on Thursday night.

The Hammers played very well in Spain but were ultimately beaten thanks to Munir’s half-volley. 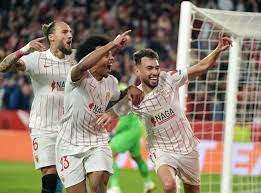 The goal came after Marcos Acuna whipped a wicked free-kick into the penalty area and Munir met it, unmarked, with a sweet, sweet strike that nestled in the bottom corner.

Munir’s strike means that the Hammers will have to score twice in the second leg if they are to win the game, a tough task against the best defensive team in La Liga.

Sevilla have conceded 18 goals in 27 games, a lower number than Real Madrid, Barcelona, and Atletico Madrid in La Liga.

And Moyes was left fuming at the way the goal was conceded.

Speaking after the game, as per Football.London, he said: “We know what our organisation was meant to be and it did not work out how it was meant to be, it was not exact. I am really disappointed as it was a lack of concentration.

West Ham will next be in action against Aston Villa on Sunday.