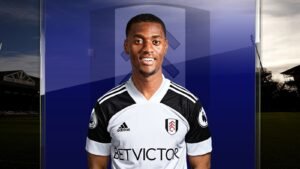 West Ham boss David Moyes is likely to move for Fulham central defender Tosin Adarabioyo as he looks to reinforce the defence this summer.

The 24 year old Manchester born central defender has been in the radar for several months but the boss had no chance of landing him in the winter with the Cotttagers so strrongly placed for promotion.

However, with the player coming out of contract in 2024, talks are set to get underway between the Hammers and his management company Closeview Sports Management.

Adarabioyo has been on a Moyes short list for several months and a bid of around £22 million is likely to get him into the Hammers.

He has been an ever present in the Fulham side since moving from Blackburn Rovers in 2019 where he was also a key player.

Thirty one year old striker Aleksander Mitrovic would also be a target but he has a contract until 2026 and would cost a fortune after finding the net over 30 times in the Championship this term.

2 comments on “Moyes has Championship defender on short list”