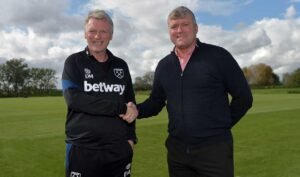 David Moyes has taken plenty of knocking over his apparent “dithering” in  transfer windows but insists that he is hard at work on transfer mission work on a regular basis.

And he continues to make it clear that he will always have the last word on who and who is not signed by the club,

It has become very apparent that is the case anyway as the winter window was the first that the Davids have not brought in anybody at all during their time in the game.

Moyes has often not been fully believed in the assertion that he’s totally in charge but in a new interview with Sky Sports he makes it clear that will always be the case.

Moyes made it clear he is thinking about who to bring in on most days and has again told the club owners that will always be the case.

“I still think the manager should have the final say,” Moyes said when discussing transfers he told the broadcasting station.

He explained “A lot of clubs have sporting directors, and as long as the manager works closely with them you can work on it and do it.

But I always think a manager tends to lose their job by poor recruitment, ultimately. If you get a chance, if you get enough transfer windows, then you’re getting judged so you have to try to make your recruitment good.

“I see it as part of my daily job (planning transfers and recruitment). I don’t do it every single day, but there’s parts of the job where I have to be looking at the squad of players I have for the future, the young players I have at the club and what might be available outside as well

You try to get as much information as you possibly can, and like anything else you’re trying to build up your knowledge. But also when you or your scouts go and see them, you hope they come back with good reports.”