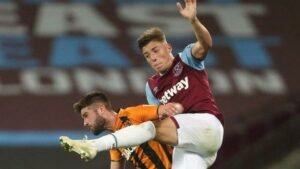 West Ham’s academy may well be in the process of saving the club a lot of money in the transfer market middle and long term.

For while it’s a regular surprise that many of the often acclaimed youngsters get no chance to impress what is known is that David Moyes has two on whom he is keeping a special eye.

Right back Harrison Ashby hasn’t featured much this season of late given a hamstring injury but he and Sonny Perkins remain very much on the manager’s mind.

It could well be that with Cress at 32 and Coufal heading into his 30s, Harrison and Ben Johnson could become our regular right and left back pairing.

Part of the reason why Ryan Fredericks will be allowed to move on this summer is because the manager wnts to watch Ashby’s development.

Perkins is very much one to keep an eye on although the management team are still uncetain of his best position – attacking midfielder or out and out striker.