Moyes keeps emotions in check with help from his friends 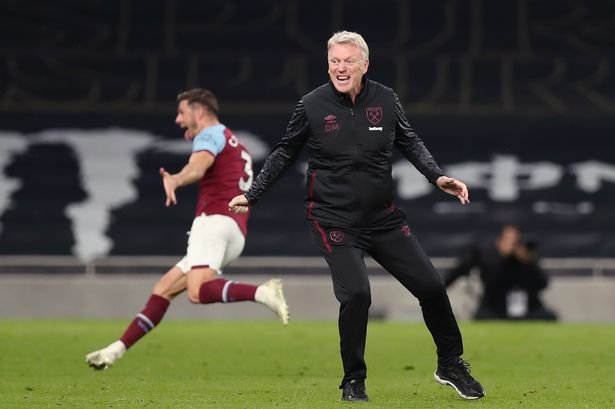 Don’t expect too many more scenes like this from Moysie

Hammers boss David Moyes is determined to keep his feet on the ground.

And to a very large extent, he is relying on a top backroom staff to ensure that he doesn’t become over-emotional.

We have seen some of Moysie’s exuberant celebrations as the season has gone by but we can expect him to be keeping a lid on things with the season now into its second half.

Close observers will have seen defensive coach looking on from the stands but Moyes is making a point of using various positions with Alan Irvine working at a high level to offer different feedback.

Moyes – talking at the pre-match Sheffield United presser – gave his reasons and said: “My assistant Alan Irvine is in the stand giving me feedback from a bit higher up as, when you’re at touchline level, it is sometimes difficult to get distances and on the length of the pitch and a lot of things like.

I’ve got other people around me feeding back, so we’re continually trying to work as a team to get the best outcomes and have the best solutions.

It might not look like it, but I try to keep myself at an emotionally decent level and not get too wound up with anything so I can take things quite calmly.

Thankfully, I’ve got good people around me who make things a lot easier.”