Posted by Dave Langton on October 25, 2021 in News, Whispers

David Moyes has lauded Ben Johnson after his display against Spurs on Sunday.

The Hammers kept a clean sheet against their bitter London rivals, recording a 1-0 win thanks to Mikey Antonio’s poked finish. 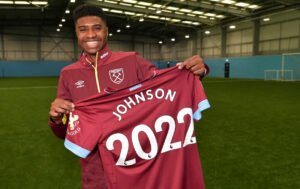 Aaron Cresswell whipped in the cross but Johnson, on the other flank, was just as effective, helping to muzzle Son Heung-Min on the left flank as the Hammers limited them to very few chances throughout the second half in particular.

Johnson also played last week as the Irons beat Everton 1-0, and was in the starting XI against Genk in the Europa League.

And Moyes was at pains to point out how good Johnson was after coming in as a deputy for Vlad Coufal following his groin injury.

Speaking after the game, as per Football.London, he said: “Ben Johnson has had three games this week and I thought he was fabulous.”

Johnson is just 21 and has now made a total of 30 appearances for the club, scoring in a 2-2 draw with Brighton in December of 2020.