David Moyes’s penchant for signing central defenders shows no sign of relenting according to an article in the Daily Record. The Scottish newspaper is reporting that West Ham have an interest in Stoke defender Harry Souttar.

The Hammers seem to permanently have an injury crisis in central defence despite spending big on the likes of Kurt Zouma, Nayef Aguerd and Thilo Kehrer.

Souttar’s reputation is growing following his impressive performances for Australia in the World Cup, playing all four games to help the Socceroos reach the knockout stages of the tournament for the first time in 16 years before they were jettisoned by Argentina.

It’s widely accepted that Souttar will leave Stoke in this transfer windew and with the Potters currently performing poorly in the Championship and some way off the play-offs, they will find it difficult to convince him to stay at the bet365 Stadium. 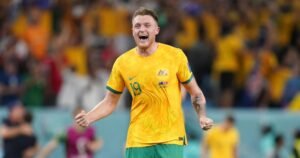 But with his contract running until 2025, they have an opportunity to ask for a large fee for their starlet and it will be interesting to see how much Premier League clubs are willing to offer.

This is certainly one player who can ‘do it on a windy February night in Stoke’ so shouldn’t require the usual Moyes settling in period.