Moyes makes mind up on youngster

David Moyes is set to hand Conor Coventry a run in the first-team when he returns from his loan spell at MK Dons, according to a report from Football League World.

The outlet claims that the Hammers boss has been impressed with the performances he has been putting in during his time with the League One club. 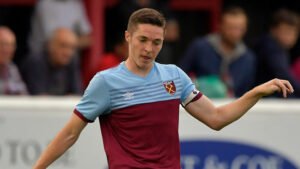 Coventry has played six times for the club since moving down the leagues and the Irons are said to be keeping a close eye on his development at the club, with an eye on bringing him into the first-team next season.

Coventry has so far struggled to make a real impact in east London and has made just three first-team appearances for the club.

The 21-year-old has gone on multiple loans since breaking through at West Ham, playing for Lincoln City and Peterborough United before making the move to Milton Keynes, where he does seem to be a key member of the squad.