Moyes may have to wait a little longer

West Ham’s David Moyes is keen to submit an offer to sign Youssef En-Nesyri from La Liga this January according to Spanish sports daily Marca.

Moyes attempted to sign the Moroccan international in the summer of 2021, but Sevilla rejected West Ham’s €30m offer for the striker who scored 24 goals during the 2020-2021 season. 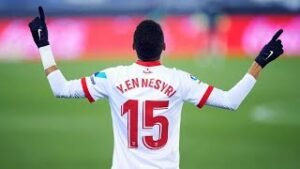 The Hammers manager may remain flustered in his pursuit for an additional striker whilst he remains on unofficial probation pending an upturn in results.

Sevilla may well be more receptive to a bid for their out of favour star having seen a downturn in form recently. They find themselves just above the relegation zone only thanks to having a superior goal difference to Cádiz.

En-Nesyri has failed to score a solitary goal in La Liga so far this season, but has been in better form in the Champions League and Copa del Rey .

It’s clear that Moyes’s team are in desperate need of more firepower, but the board face a conundrum of whether to financially back a manger who may be released if results don’t improve. With that in mind it could well be prudent to offset the outlay until the managerial situation is resolved.

Marca are reporting that West Ham are in the process of preparing to submit a 6 month offer to loan the 25-year-old striker, with the option of buying him permanently at the end of the season.

2 comments on “Moyes may have to wait a little longer”