Posted by Dave Langton on January 15, 2022 in News, Whispers

David Moyes has confirmed that Aaron Cresswell will be fit to play against Leeds this weekend after coming through his return unscathed in midweek.

The left-back returned to the team for the 2-0 win over Norwich in midweek. 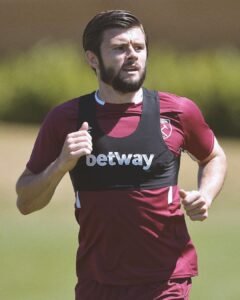 He had been out due to a rib injury prior to that, missing seven league games in succession.

But he is fit and available for selection from this point onwards as the Hammers look to continue their bid to finish in the top four.

Moyes has also admitted that Ryan Fredericks picked up a knock in the FA Cup clash with the same opposition, which the Irons won 2-0.

Speaking to reporters, he said: “Ryan picked up a knock on his knee in the Leeds game. That’s why I’m saying we are carrying a few knocks and niggles around at the moment with different players.

“Cressie came through the game and he felt fine. I thought he played really well for his first game back after that time but then you have to consider how quickly the second game comes around for them and how he’s going to be.

So they are the sort of dilemmas you have but we get on with it and we well know it will be a long hard slog against Leeds, it always is.”