Moyes says Hammers are well in the hunt

Posted by Dave Langton on January 13, 2022 in News, Whispers

David Moyes believes the Hammers are firmly in the hunt to qualify for the Champions League after climbing back into the top four with their 2-0 win over Norwich.

The Irons were comfortable throughout against the Premier League’s bottom club and a Jarrod Bowen brace proved decisive at the London Stadium. 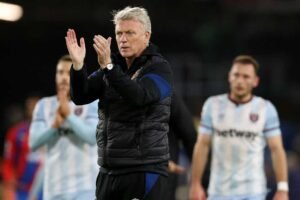 The result means that Moyes’ men are currently two points ahead of fifth-placed Arsenal, although they do now have a game in hand on Mikel Arteta’s side.

Still, Moyes is happy to see the Hammers back amongst it at the top end of the league and insists he has always felt that qualification was on, even when the club has seen form dip and wins that little harder to come by.

Speaking after the win, as per Football.London, the boss said: “You take three Premier League wins in a row because that is not easy to do. I never thought we were slipping away but the competition is really difficult, you cannot forget about Wolves, Leicester and Arsenal and Spurs and Manchester United.

“The fight is tough, we have to win games and we have done that and scored some goals. We have injuries and Covidbut I am really pleased with how the players are doing.”

Moyes also admits that he has laid down the gauntlet to his players, insisting that they have to be better than last season, when the Irons were just two points behind fourth-placed Chelsea.

He added: “I have given the players the challenge to see if they can make up the two points they were short last year. Behind that is trying to keep the consistency and keep us around the top teams and see where we end up. A few blips with injuries have not helped us but having Cresswell back today helped.”