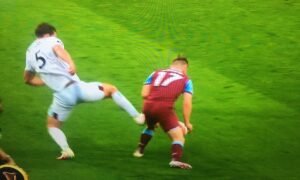 David Moyes was surprised that James Tarkowski’s challenge on Jarrod Bowen didn’t result in a sending off for the Burnley player.

Tarkowski raked his studs down the back of Jarrod Bowen in the second half on the far touchline but referee Michael Oliver booked the Clarets centre back and VAR opted not to upgrade the decision.

Post-match the West Ham manager told reporters on a Zoom press conference “It’s a red card. It’s not going to change anything now but it’s really disappointing the ref didn’t see it, the linesman didn’t, and VAR didn’t.”

Sean Dyche told reporters after the match that he hadn’t seen it, very convenient.

Moyes questioned about VAR the gaffer said “I probably wouldn’t agree with the reason they come up with if we did have anything to say about it. We had one go our way with the offside. In the three or four games we have, they can go our way”

His challenge on Jarrod Bowen only produces a yellow card 😬

But @karenjcarney thinks it was worse than Eddie Nketiah’s against Leicester… pic.twitter.com/J215f4Wx4v