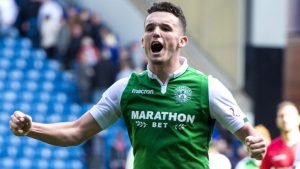 The Hammers assistant boss watched the midfielder in the Hibees’ 2-0 victory over Aberdeeen.

McGinn was regularly mentioned as a target during the winter window and  with just a year left on his contract this summer, the Irons look set to move in at the end of the season.

He is reported to have been outstanding for Neil Lennon’s side in their win against the Dons and the 23-year-old is although he is being tracked by several clubs in England, the Hammers are favourites.

Lennon is desperate to keep the Scotland star and has previously valued him at £5 million.

Moyes’ ongoing interest in the 23 year old also suggests that the manager is ready to stay at the London Stadium if the club offer him an expected deal this summer.