David Moyes now looks certain to be in charge of the Hammers for the match against Everton at the London Stadium on Saturday.

The under pressure manager – having escaped the bullet following the Wolves defeat – is working on a game by game basis. 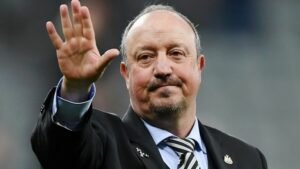 And the game against Everton gives him yet another opportunity to remain in charge should he gain victory over former Hammer Frank Lampard’s outfit.

Defeat would be the disaster of disasters and we understand that despite their desperation to see him turn things around a short list is being  – or has been – drawn up.

Given this includes the likes of Rafa Benitez and former Wolves boss  Nuno Espírito Santo it is understandable that there is still some hope  Moyes can do the business unlikely though that seems given recent results.

Their is an auxiliary reason for keeping him in place too given the pre-match tribute to the late co chairman David Gold.