Moyes should resist this temptation 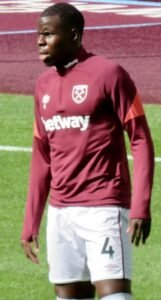 West Ham boss David Moyes may well be tempted to bring back Kurt Zouma for Sunday’s clash against Leeds but frankly it is an option he should perhaps resist.

The big central defender has been out of action since doing a ligament in the game against former club Chelsea and after two clean sheets – and with Zouma only recently back in training – it seems reasonable to keep Diop and Dawson together for this one.

The Hammers are going for their fifth win on the trot after two successive clean sheets and with no Patrick Bamford expected  in the Leeds side this may well be a game where the manager keeps the same team together as won against Norwich.

That would see Tomas Soucek again on the sidelines – and whilst we wish covid on absolutely nobody – it may be no bad thing t for him to get some further rest given the number of games he has played over the last couple of seasons.

Manu Lanzini is in terrific form and linked brilliantly with the front men in the game against the Canaries whilst Pablo Fornals did himself no harm.

Leeds are reported to have a mass of injuries and it would seem likely that we could, and perhaps should, see the same Hammers team on the pitch.

5 comments on “Moyes should resist this temptation”