Posted by Dave Langton on October 13, 2022 in News, Whispers

The Italian is now back fit and is available for selection by the Hammers boss as the Irons continue to recover from a rocky start to the season. 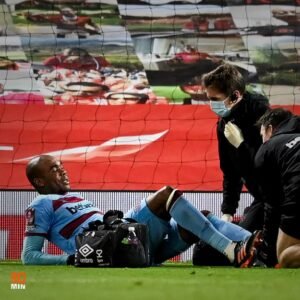 The Hammers have now won three on the spin and are aiming to beat Anderlecht again on Thursday in a result that would secure the club’s qualification to the last-16.

Ogbonna captained the Irons last week in Belgium as the Irons beat Anderlecht 1-0 in Belgium, and he has also made two Premier League appearances as he looks to get back to full speed. He is likely to be involved against Anderlecht again on Thursday.

Moyes has talked up the 34-year-old, insisting that he is a key member of the squad as the Irons continue to look up the table, instead of down.

Speaking before the Anderlecht clash, as per the London Evening Standard, Moyes said: “At the time when we lost Angelo [to injury] last season, we were in the top two or three in the league. Angelo was in great form playing alongside Kurt and probably, if we’re honest, we were maybe in our best form in that period.

“It was maybe once we lost Angelo that it started to dip a little bit in certain ways. He gave us left-sided balance at the time and it just didn’t feel quite as good after.”