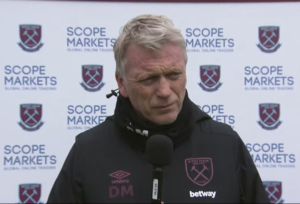 West Ham will have around £35 million from their positional bonus and entry into the Europa Cup in addition to the money David Moyes held onto in the winter window as they pursue transfer targets this summer.

Sixth place gives them £2.3 million per position plus around £2 million plus for European qualification.

It will be a big boost to the manager and just financial reward for his efforts in leading the club into it’s finest season in many years.

It means that in total he is believed to have around £85 million available before the board decide whether to add more cash to the pot.

It’s well known that a striker – or maybe even two – will be brought to the London Stadium with Tammy Abraham seen as the favourite with Sparta Prague front man Abdallah Sima also on the radar.

Both are priced at around £30 million but ideally Moyes would also like left back and midfield cover.