David Moyes has admitted we were in again lacking the ruthless edge to make Liverpool pay last night but once again congratulated the squad on their second half performance.

Commenting after the match the manager told his posy match presser: “ It’s been like that for a few weeks, when we’ve not quite looked as if we’re being ruthless enough to score and really take the opportunities.

We had the same at Southampton. I think our play has been very good and some of our football is getting better and we’re enjoying.

I was really impressed with the way we took the game to them in the second half. 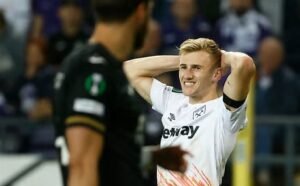 Also, you’re coming to Anfield and facing a team who has just beaten Manchester City at the weekend, so those are the reasons why maybe they started a bit better than us, but I didn’t feel really as if we were ever out of the game.

“It’s just that we kept giving the ball terribly in the first 20 minutes, so we continually giving them the ball back, which meant that when almost had to give up getting to them because we didn’t look after the ball well enough.”

Claret and Hugh says: It’s hard to disagree with too much of that but one outstanding point perhaps needs to be made. The second half was indeed a very decent performance as has been the case on various occasions this season but that’s not enough. One stat tells a story that is really pretty frightening – West Ham have managed just two first half goals this season – the lowest of any team in the Premier League and that really isn’t good enough for a club with our lofty ambitions. Not only was that in evidence again last night so was a load of sloppy passing and giveaway passes which made life far tougher than it ever needed to be. There were plenty of positives last night but this early lethargy needs to be corrected forthwith. A word for Flynn Downes. He provided the flick which led to the missed penalty and didn’t look out of place in a tough game. So well done to him.

One comment on “Moyes verdict overlooks a serious point”