Posted by Sean Whetstone on April 23, 2020 in News, Whispers 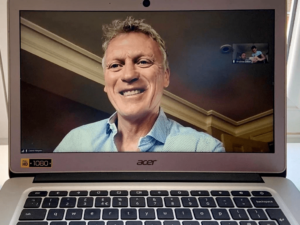 David Moyes has voiced his concerns over a return to football and what impact a fixture pile-up might have on the game.

Moyes told the Sun: “I wouldn’t want next year to be affected. Why would we let this horrible virus have an impact on football going forward? We know it’s having a big impact just now. Just before the virus quite a few managers came out talking about the fixture pile-up.

“Well if we’re not going to finish the season until roughly about the time we expect to start the next, which would be mid-August, I can only see so much football getting squashed in — especially for teams who are fortunate enough to be in the Champions League or are regular contenders in the latter rounds of the FA Cup and League Cup.

“I’m saying to myself how can we possibly fit all the games in and get the quality we’re looking for?

“I’m finding it really difficult to see where the conclusion is and how we can start.

“Broadcasters coming into stadiums to film the games would all need to be tested. There’s an awful lot of different parts to it.

“The deeper and deeper you look the harder you feel it is to get it up running again. But I do feel it’s important for the nation as well. Football plays a big part.

“Even for people to see some football on the telly would be good. but again it can’t come in front of us saving lives and supporting the NHS.

“Would a physio want to massage a player? Would you get tested before a game? Well what about after a game and you go back to your family? Are you tested after the game?”

ClaretandHgh says: We said on a previous occasion when the manager chose to talk about fixture pile-ups that his position appeared to be clear. And he seems to have gone further in confirming that with the piece he’s now given to his chosen paper. It’s easy to understand from his perspective for should the season be cancelled that will mean either no relegation at all or none for the Hammers. Frankly we have no issue with either scenario as Hammers fans and after an overlong relegation battle on his first arrival at the club, we can understand that the manager wants – and probably deserves – a break from the same again. The worst part of what’s going on is the lack of certainty. Were the PL to pull the curtain down on the season everybody could live with that and allow clubs to plan and budget for the future. As things stand we would hope that if the government show no indication of a return for football on their next review date of May 7 the League will call it a day. However we are not holding our breath.