Moyes wants to create his own West Ham history 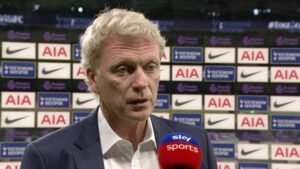 David Moyes says he wants to create his own new West Ham history instead of looking back at former glory days.

Moyes told reporters on a Zoom pre-match press conference earlier today “West Ham has a fantastic history but what we want is new history and I want the chance to build new history, make new history, create something which gives us a feeling of hope for the future. The big thing first though is to win our next four or five games and make sure we are a Premier League club, if we do that then we can start building new history and I want to be the guy to do it. I have got a lot of ideas and thoughts where I want to take the club if I can do it but I have to mention there have been some unbelievable managers and players at this club who are recognised worldwide.”

As Moyes says he needs to save West Ham from relegation from the Premier League first before he thinks about winning the FA Cup, the League Cup, the Premier League, the Europa League and the Champions League over the next five years. One step at a time though David 😉