Moyes will need to find £70 million for midfielder 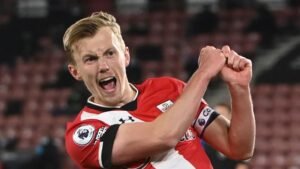 James Ward-Prowse could well cost the Hammers around £70 million should David Moyes remain fixed on the Southampton captain,

The central midfielder signed his last deal with the south coast club only last year and is now contracted to Saints for another four years.

He remains as important to the club as Declan Rice is to the Irons and when Spurs went in for him they were understood to have been quoted around the £70 million.

Moyes is believed to have made him the 27 year old a key target but he is going to come far from cheap.

The buzz on the media grapevine is that the Hammers boss has ruled out a bid for for an expensive striker.

It has been suggested that  he sees central defender Nayef Aguerd as his priority signing although Ward-Prowse would dwarf that fee by more than double the £30 million we are said to be paying for the Rennes midfielder  who is believed to be completing his medical at West Ham today (Friday).