David Moyes was delighted with the performance of Mark Noble against Rapid Vienna after the 2-0 win on Thursday.

The Hammers turned in a thoroughly professional performance in Austria to secure top spot in the ground and progression straight through to the round of 16. 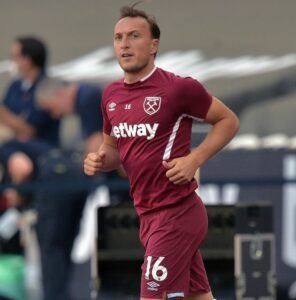 Andriy Yarmolenko scored the opening goal with an excellent back-post header before Nobes stepped up to dispatch a penalty in trademark style after the Ukraine international was fouled in the box.

And Moyes was delighted with his display as he continues to manage his minutes carefully throughout the campaign.

Speaking after the game, as per Football.London, Moyesie said: “He has made such a contribution to West Ham and it is his final year at West Ham. He has scored two penalties and is a really valuable member of the team and I always thought he would be needed with all the extra games.”

And the Hammers boss was thrilled with the overall performance as the Irons prepare for the knockout rounds, when they could take on a team that has dropped out of the Champions League; potentially a side as big as Borussia Dortmund, who have been eliminated.

The Irons boss added: “I have not taken it in yet. I knew if we could get the job done, and we were unlucky in Genk but tonight we were professional, we have not played as well as we have done but it was enough to get us through. It is a good sign I am not overly pleased with how we played but we won with relative comfort.”

This result also means that the Irons have no pressure whatsoever on their final group game, against Dinamo Zagreb.