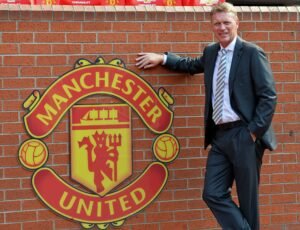 White reckons a return may be on the cards

Jim White has painted a scary scenario for West Ham by claiming that Manchester United is looking a realistic managerial option for David Moyes this summer.

The talkSPORT presenter talked up the possibility earlier this morning and it’s a suggestion that has to take a looed at in realistic terms.

With Ralf Rangnick’s impending departure at the end of the season there has to be a possibility  the Reds will come looking given the boss’ achievements at the London Stadium.

And in a recent interview with Alan Shearer, Moysie implied that he has become a better manager over the years and probably hasn’t ruled out thoughts of managing one of the big clubs.

However, his biggest problem is off the field and it’s that which may well rule him out of an Old Trafford return.

A big rebuild with huge money will be required – as is their way –  and part of the reason for his sacking last time was thought to be based on his inability to get that sort of job done.

However speaking on talkSPORT’s White and Jordan this morning [29 March], White put his fellow Scots’ name forward when debating who should take the hot seat at Old Trafford in the summer.

“Surely David Moyes comes back into, with credibility, the Manchester United equation,” he said. “He was unjustly dealt with the first time around, give him more time and things might be different.

“What Moyes is showing is that he can compete regularly with the elite. He is competing with West Ham, so what can he do with United? I would suggest a lot.

“I am saying Moyes is a credible candidate to be the next manager of Manchester United and should be considered such by the hierarchy.

“Do you not think Moyes would like to right the wrong? I’m sure he would.”