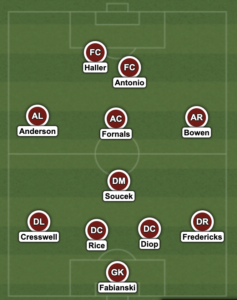 West Ham manager David Moyes has some big decisions on his hands on Saturday but it will be a squad game to complete nine fixtures in just five weeks.

Fabianski must be a nod in between the sticks for Saturday with Darren Randolph on the bench for any injuries.

I can see him starting Ryan Fredericks at right-back but with Jeremy Ngakia on the bench if Fredericks tires after returning from a long term injury.  Issa Diop should be another shoo-in for centre back but I can see Moyes dropping Declan Rice back to partner Diop instead of risking Ogbonna who I think will be on the bench.

At left-back, Aaron Cresswell is the only real choice with maybe Ben Johnson on the bench if Arthur Masuauku has not recovered from a knock.

In front of the defence, I see Tomas Soucek fulfiling this role instead of Rice.

In midfield, I predict Jarrod Bowen, Pablo Fornals and  Felipe Anderson with Lanzini, Noble, Wilshere and Yarmolenko on the bench.

Upfront Seb Haller and Michail Antonio behind to his right.