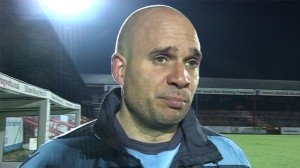 The shock news was confirmed by the reliable @EXWHUEmployee on twitter this evening and has come as a surprise to many as he was a very popular figure at the club.

No reasons – official or unofficial – have been given for the departure of a coach who joined the club five years ago when he looked after the under 18s before stepping up to look after the under-21s three years later.

Haycock was absent from the under 21 game against Norwich today which the Under 21’s lost 1-0 after going down to ten men when Lewis Page was sent off early in the match.