Netherlands midfielder may be back on our radar 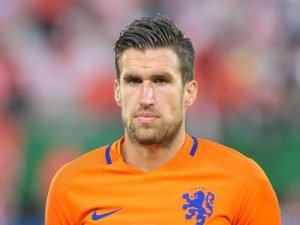 Netherlands defensive midfielder Kevin Strootman could be back on the Hammers radar after revealing that Marseille want to sell him.

According to Sky Sports, the Irons, Everton and Man United have been offered the chance to sign the player on loan in the summer transfer window.

And Strootman has now made it clear that the financial situations at his club mean that he could very easily be on the move to the PL.

With the move for Andre Gomes having seemingly collapsed a move for the 29 year old could be a tempting opportunity for Manuel Pellegrini.

His pedigree is top class and a year’s loan with an option to buy could easily suit the club where the boss has made a midfield defensive partner to Declan Rice a top priority.

Speaking to Algmeen Dagblad – as translated by Goal.com – Strootman said:” We didn’t get European football while at Marseilles they went out of the Champions League.

They want to get rid of me, is the message. But I signed a five-year contract last summer and Marseille have paid a big transfer fee to Roma, so it’s not like clubs can take me for a very low price. We have to wait to see what happens in the market and how it will go.”

Strootman most definitely looks an option for the Hammers and it would seem that with Gomes on the way to Goodison ourselves and Man U are the two clubs to which he may now be  available.

There have been no moves in his direction at Old Trafford but it remains very early days in the transfer window although Pellegrini is famous for wanting to get his deals done early.

There would be a hefty loan fee involved – probably around €5 million and according to some reports he is valued at around €20 million should any move be made permanent at the end of next season.

4 comments on “Netherlands midfielder may be back on our radar”