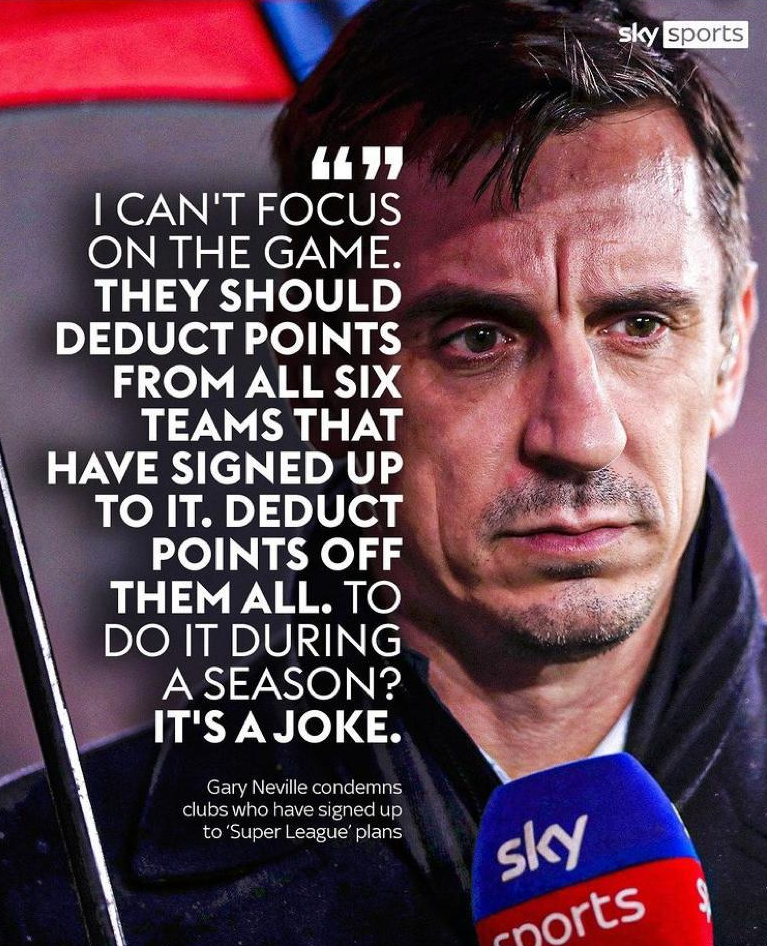 Sky Sports pundit Gary Neville is furious with his own Manchester United and five other clubs who have agreed to join the European Super League.

Neville told Sky Sports TV viewers “I can’t focus on the game, they should deduct points from all six teams that have signed up to do it! Deduct point off them all. To do it during a season is a joke!”

Speaking on camera Neville added “It’s been dammed and rightly so, I am a Manchester United fan and have been for 40 years but I am disgusted, absolutely disgusted. I am disgusted by Manchester United and Liverpool the most. Liverpool, the pretend (with) ‘You’ll Never Walk Alone’ (they are) the people’s club, the fans’ club. Manchester United – 100 years, born out of workers. And they are breaking away into a league without competition, that they can’t be relegated from? It is an absolutely disgrace. Honestly, we have to wrestle back power in this country from the clubs at the top of this league, and that includes my club.”

Neville went on to hit out at the owners of England’s biggest clubs, many of who are foreign-owned with the Glazers owning Manchester United. He added on Sky Sports: “I’ve been calling for 12 months, as part of an another group, for an independent regulator to bring checks and balances in place to stop this happening. It is pure greed. They are imposters. The owners of this club (United), the owners of Liverpool, the owners of Chelsea, the owners of Manchester City, they are nothing to do with football in this country.

“The time has come now for an independent regulator to stop these clubs having the power base. Enough is enough. The motivation is greed. Deduct them all points tomorrow, put them at the bottom of the league and take the money off them. Seriously, you have got to stamp on this.

“It is criminal. It is a criminal act against football fans in this country. Deduct points, deduct money and punish them.”

A fifteen point deduction would cut Manchester City’s advantage and leave them on 59 points and within reach of Leciester City and West Ham United while Manchester United would plummet to seventh place on 51 points.

On 31 points Arsenal would be in real danger of relegation, Spurs would drop to 15th, Liverpool 14th and Chelsea 13th as they paid the price for their treachery.

The Hammers would be promoted up to third place in the Premier League table and almost guaranteed Champions League football but at what cost to the game as a whole.

😡 | “I’m a #MUFC fan and I’m absolutely disgusted.”
💥 | “They are an absolute joke.”@GNev2 gives a brutally honest reaction to reports that England’s biggest clubs are expected to be part of plans for a breakaway European Super League. pic.twitter.com/VfJccHgybc

← Fighter Fornals: ‘We did enough to get a point’
Euro Super League? Kick top six out if possible →
Click Here for Comments >