Posted by Sean Whetstone on October 11, 2019 in News, Whispers 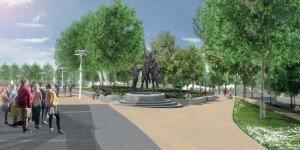 West Ham plans to commission a new statue honouring Bobby Moore, Martin Peters and Geoff Hurst have taken a step closer with a new design for a statue now being reviewed by the club.

Vice-Chairman Karren Brady told West Ham United Official Supporters’ Board Members earlier this week that the new statue has now been designed but has not been commissioned as yet.

Earlier this year supporter feedback had suggested that the players there featured in the Champions Sculpture in Green Street should be replicated in a West Ham context for the empty plinth close to the London Stadium.

The club has been in discussions with the organisations who had installed statues at Emirates Stadium and in Parliament Square.

Planning permission in Champions place outside the London Stadium has already been granted and it is hoped that the statue can be unveiled to celebrate the club’s 125th anniversary next year.