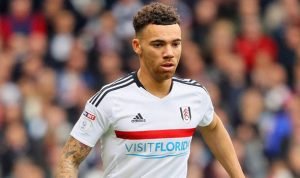 Fredericks has been an ever-present for Slavisa Jokanovic’s side this season, contributing five assists in 28 appearances for the Championship play-off chasers.

The player is out of contract at the end of the season but Fulham claims they have the option to extend Fredericks’ contract by a further 12 months and they indeed intend to take up that option.

Southampton, Swansea, Stoke City are all said to tracking the 25-year-old. Fredericks arrived at Craven Cottage in the summer of 2015 from Bristol. Fredericks originally came through the ranks at Spurs youth and made his first-team debut against Hearts in the Europa League in 2011. He spent time on loan with Millwall, Brentford and Middlesborough.

Like Tom Cairney Fulham have slapped a not for sale warning to other clubs but rumours suggest West Ham could attempt to lure them with an offer before the transfer window closes on Wednesday.

← Mike on Monday gives it large to the Daves!
Another Hammer could leave before Wednesday →
Click Here for Comments >