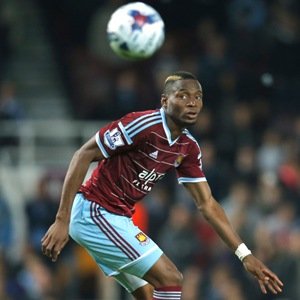 Diafra Sakho is believed to have again injured his back and will be carefully monitored over the next two or three days by club medics!

The striker left the action against West Bromwich Albion in the 72nd holding his back after just failing to score from a sitting position during a goalmouth melee.

And although it’s too early to say, there’s a possibility that the injury could keep him out of the African Nations Cup Tournament which kicks off in Equatorial Guinea on January 17.

A club source told ClaretandHugh a few minutes ago: “We think the boy has done his back again. It’s a recurring injury now since he was with Senegal last time. It’s become a problem.”

Whether the fresh injury will keep him at home is in the balance but the potential for a club v country battle is very much on the cards.

Club officials remain upset that Sakho has a problem at all and our source said tonight: “They messed him up in the first place, now he has a recurring back injury.

“However, the situation is that they can pick him right up to 17th and  they might want him in Dakar for their medical people to inspect the injury.

“We’ll know a lot more over the next few days/weeks.”

One comment on “New Sakho back injury may hit Senegal”