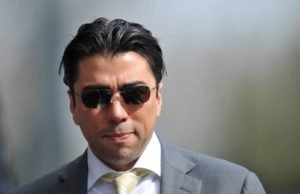 With a denial that Willie McKay is involved in attempts to bring Sebastien Haller a new agent has been linked who is all too familiar to West Ham fans.

Sources in Italy have told Claret and Hugh that super agent Kia Joorabchian is attempting to broker a deal between West Ham, his agents and Frankfurt as an intermediary.

Joorabchian became known to Hammers fans after the signing of Carlos Tevez and Javier Mascherano in 2006 as part of a proposed take over bid. In recent times he was involved in the Felipe Anderson transfer last July.

Italian journalist Nicolo Schira who first broke the Haller news is reported to be a friend of Joorabchian.

Last night Schira repeated claims saying  “It’s confirmed: West Ham have an agreement with Frankfurt (€40M) and Sébastien Haller.  His agents have accepted the West Ham’s bid (contract until 2024 by € 3M per year + bonuses). Now Hammers are waiting for him before the chinese tour departure”

Club insiders have denied that there is any agreement yet in place with Frankfurt but have confirmed he is a target of interest.

Joorabchian is thought to be flying to London and wants to meet with West Ham to further negotiations.