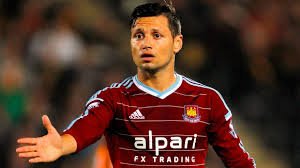 Mauro Zarate is again at the centre of transfer speculation which according to the club is ill informed.

Malaga are the latest outfit to be linked with the player although the club insist the Argentine striker is going nowhere.

Canal Sur radio has reported that the club based on the Costa del Sol could make a January move following injuries to Nordin Amrabat and Juanmi that could keep both out for the next two months.

It leaves them with only Roque Santa Cruz and Ezequiel Rescaldani as recognised frontmen in Javi Gracia’s squad.

It’s claimed that the Hammers have forged close links since the clubs met in the Schalke Cup in Gelsenkirchen during the summer, and that Sam Allardyce has already run the rule over Los Blanquiazules left-back Vitorino Antunes and striker Ezequiel Rescaldani.

However, an Upton Park source told us this morning: “I suppose we can expect Mauro to be linked with every club that a journalist fancies. There’s nothing in it. It’s more ill informed talk ”