Newcastle facing ” we won’t sell to you” threat 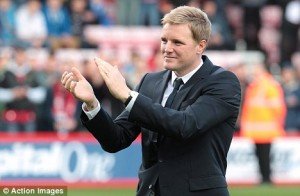 One time favourite for the Hammers management role Eddie Howe could face an enormous January transfer window problem at Newcastle.

Howe was regularly touted as a replacement for Manuel Pellegrini as the Chilean faced the Hammers exit door.

It didn’t happen of course and the relegated Bournemouth boss is now looking to revolutionise a club deep in relegation mire.

But he and the Saudi owned club are facing a bitter lash back from Premier League clubs this winter.

For according to new reports the Magpies will find it very difficult indeed to sign players if an “anyone but Newcastle ” move is enforced by the other Premier League clubs.

It’s a warning that none of the Hammers stars would make such a move.

According to the Mail the policy is more than under consideration by clubs which will see the Magpies unable to buy or loan players.

The hope clearly is that following serious opposition to the takeover, the  newly-rich Magpies find themselves relegated.

The Mail reports there has been serious opposition to Newcastle’s recent Saudi-led £305m takeover within the top fight and last month clubs even voted through new rules preventing the new owners from landing lucrative commercial deals.

The takeover has been met with enormous scrutiny because of Saudi Arabia‘s poor human rights record and the sheer wealth of the nation’s Public Investment Fund – which owns 80 per cent of Newcastle.

Howe is plotting to bring in players with plenty of Premier League experience in January, either on loan or permanent deals but, according to The Telegraph, their domestic rivals will refuse to do business with them.

An ‘industry expert’ is reported as saying:  ‘Newcastle will find it hard to buy players from some Premier League clubs in January because they would rather see them relegated than take their cash. Some clubs just won’t sell to them.’

Even their relegation rivals – who boast nowhere near the some financial power as Newcastle – are said to be willing to reject offers from the Magpies amid fears selling could seal their fate.

Meanwhile, it emerged earlier this week that Michael Emenalo is the leading candidate for Newcastle’s Director of Football role.

The new ownership are looking to transform the club’s structure on the footballing side of the business, and are looking into creating the position.

Claret and Hugh says: Let’s hope it happens. Enough has been said about the Saudis and their human rights issue. Just appalling. Nobody with any decency would want any part of such money and whilst the PL hasn’t the greatest record on financial morality perhaps it’s good news the clubs may be seeing and acting in a more ethical manner. The winter is never the best time to sell anyway and frankly it’s hard to see a one time relegated manager avoiding the same with Newcastle. We are just hoping the clubs stick by their guns on this one.