No panic – we were just unlucky

Posted by Sean Whetstone on August 27, 2014 in Whispers 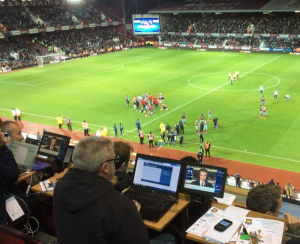 In the sober light of day my overall impression was we were a tad unlucky on the night.

And don’t need to over react at being ceremoniously dumped out of the Carling Cup by a League one side writes Sean Whetstone.

Last night’s game, billed as a £260m grudge match by one paper never materialised, there were just a handful of Tevez masks worn by fans and songs of ”There is only one Carlos Tevez’ quickly disappeared a few minutes after kick off.

On paper the mixture of talented youngsters, experienced first teamers and new signings should of been enough to overcome the Sheffield United.

We dominated possession and the Blades never really looked like scoring from open play. Their biggest danger came from set pieces but our defence comfortably dealt with them too with Reece Burke having a tremendous game in the centre as well as setting up the Sakho goal.

On most other nights Sakho’s goal would of been enough to see off the league one opposition but a bizarre own goal from the ankle of an out of form Reid saw pay to that.

Maybe he was a bit unlucky but it shows the fine margins in these kind of games. Maybe the old story of Hammers not  finishing is a valid point and Valencia should of done better in my opinion, but it was his first full debut.

The basic truth is that on the night the assembled cup team just didn’t completely gel to score more goals.

It was therefore enviable that record summer signing Enner Valanecia would be the one to have his penalty saved and send us crashing out of the Carling Cup 5-4 on penalties.