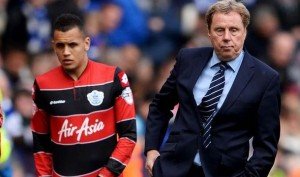 Mauro Zarate will have no recall clause in the loan deal which is likely to see him join Queens Park Rangers!

Harry Redknapp is moving quickly to tie the deal up and under Premier League rules the Irons are not allowed a release clause.

A Hammers source revealed there was no chance of the player coming back to Upton Park should we suffer injury problems over the next few months.

He told ClaretandHugh: “Premier League loans have to be for half a season. Only loans in the lower divisions can be for 30 or 90 days with recalls at the 30 day mark.

That of course was the case when Redknapp took Ravel Morrison (seen above) on loan whilst Rangers were a Championship outfit last season.

Meanwhile, Redknapp commented: “He’s (Zarate) a clever player. “He can open the door. I first came across him when he was at Birmingham quite a few years back. Alex McLeish had him there.

“Its not done and dusted yet but it is something we are interested in. “We are looking at a couple of loans. We want to get them in as soon as you can because you’ve got five or six games in the month again.”

One comment on “No release clause in Zarate QPR deal”