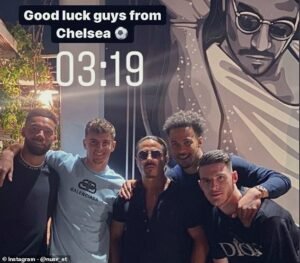 Club insiders have denied a Sky Sports report that a £50m bid has been received for Declan Rice from Chelsea.

The club continues to insist absolutely no enquires or bids have been made for their 21-year-old defensive midfielder despite daily speculation. They also say he is not for sale and they will resist any offer that is made for their star player.

Chelsea fans have been getting over-excited because Declan Rice is on holiday with Chelsea players Mason Mount, Tammy Abrahams, Christian Pulisic and Fikayo Tomori but it means nothing as dozens of Premier League footballers including Ryan Fredericks are on the Greek island of Mykonos.

Rice and Fredericks will report back for pre-season testing on Sunday before the training starts at Rush Green on Monday.

2 comments on “No Rice bid received”