No troubles at London Stadium

Posted by Sean Whetstone on November 5, 2016 in News, Whispers 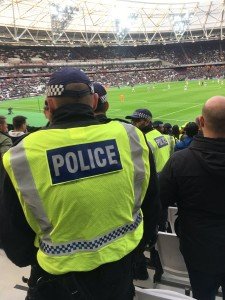 This will not be a headline you will be reading in the Sunday papers because it will not be considered news worthy.

The Metropolitan police and operators London Stadium 185 have confirmed NO arrests were made inside or outside the stadium and there were NO incidents of notes.

Met Police told us: “No arrests, No issues of note and Police worked well alongside Stewards inside the stadium”

A spokesman for London Stadium 185 confirmed: “No arrests or major incidents”

Eye witnesses told us there were minor incidents with Stoke City away fans in the upper tier with stewards and one Stoke fan was seen escorted from his seat in the away end. We understand stewards quickly bought the incident under control without police assistance.  Other West Ham season ticket holders said a small minority away fans did they best to incite trouble but West Ham fans were on their best behaviour and didn’t respond to the goading. 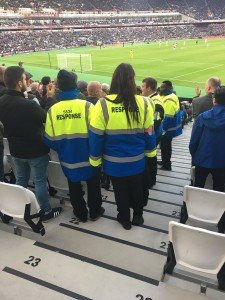 There was added security in block 127 in Sir Trevor Brooking Lower where 159 season ticket holders were relocated from block 114 in the West stand.  Security stewards with yellow caps were present in this block as were police in the first half but supporters commented that the police were friendly and not heavy handed in any way. Rumours of snatch squads appeared to be just  and very wide of the mark, no-one to our knowledge was snatched out of their seats to be handed over to police as was suggested before the match.

Ticket holders in the Sir Trevor Booking lower were regularly asked to show their tickets when entering the stand in a new protocol to ensure  they have a valid seat in the section next to away fans.

6 comments on “No troubles at London Stadium”