Nobes has let his Sonny Perkins feelings be known 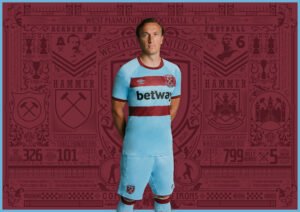 Mark Noble will be an unhappy Hammer if Sonny Perkins is allowed to leave the club within the next 12 months,

Claretandhugh was told last night the youngster was unlikely to be leaving but anything could happen if the dispute over his required wages isn’t settled amid reports that both Leeds United and Aston Villa are keen to get involved in negotiations.

That of course may be agents tipping off favoured media sources in the hope of putting pressure on the club to give the player the deal they are after.

Having said that it’s conceivable the young striker has clearly caught the eye of several clubs and has come closest to gaining first team recognition at the London Stadium despite not getting a start for the first team.

Nobes talked the youngster  him up in a big way during last season and made it clear – just as he has done over Declan in the past  he wants his future to be at West Ham.

He was been reported as saying : “Sonny is someone that I’ve watched for a long time now. He started in the No.10 role and he’s moved up to the centre-forward role for the U23s, and scored a lot of goals. His hold-up play is superb.”

“He is another young, exciting player that we’ve got at the club and hopefully he can keep producing performances in the U23s. When he comes up with us, I hope he can continue to train well and gets into our first team.”