Posted by Sean Whetstone on March 22, 2021 in News, Whispers 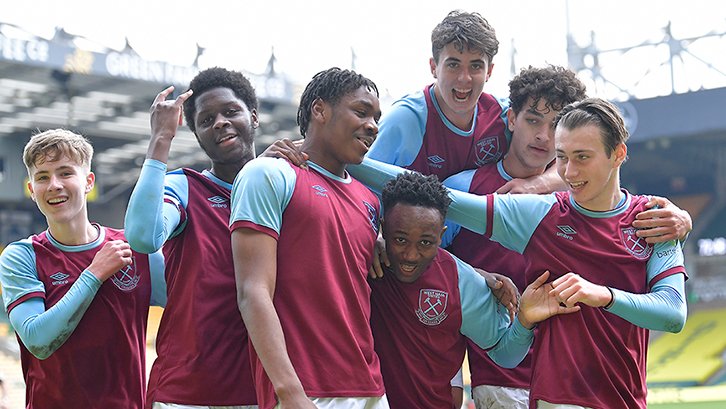 West Ham captain Mark Noble travelled to Norwich this afternoon to cheer on the Hammers Academy Under 18’s in the FA Youth Cup.

Kevin Keen’s youngsters came away 5-0 winners at Carrow Road to book their place in the FA Youth Cup fifth round.

The youngsters  can take great pride in an excellent all-round display, being steadfast in their defending, efficient in their attacking – and decisive in the moments that mattered either side of half-time.

After soaking up some early pressure, the Irons took the lead early on when Mipo Odubeko collected Kai Corbett’s pass, turned and swept the ball into the bottom corner after ten minutes.

An end-to-end encounter saw chances traded at both ends, but the young Hammers took command before the break when Odubeko tapped in captain Jayden Fevrier’s pinpoint low cross and – on the stroke of half-time – Fevrier capped a fine Kamarai Swyer pass with a powerful finish.

Norwich came out of the traps with renewed vigour, but rigorous defending – including one particularly impressive save by Kristzian Hegyi – kept Norwich at bay, before Jamal Baptiste’s header from a Corbett corner – and a low rocket from the latter – coated gloss to the scoreline.

As a result, West Ham’s youth team can now look forward to their first FA Cup fifth round draw since the 2011/12 season, which is set to take place on Friday.

One comment on “Nobes shares in big Cup triumph”