Nobes tees off with Francesco

Posted by Sean Whetstone on October 10, 2018 in News, Whispers 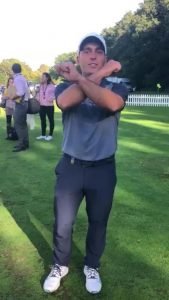 Molinari invited Noble to join him on the course at Walton Heath Golf Club just a few days after winning all his matches to lead Europe to a Ryder Cup win over the United States. 16-handicap Noble  and Molinari were joined in their fourball by Glenn Hoddle

“Obviously it’s a massive game at home for us, as they always are against Spurs,” Noble told tournament sponsors Sky Sports speaking about the upcoming game against Spurs at the London Stadium.

“We’ve got a quite a good record against them lately, but they’re a fantastic team and have got great players.

“They’ve had a bit of an up and down start but what a great team they are and we are looking forward to it.

“You don’t need to tell the new players they need to be up for this game, as they get it all week from the West Ham fans on social media and in the street and once they feel the atmosphere at London Stadium, they’ll know how important the game is!”