Noble and Moyes to attend PL meetings on Wednesday 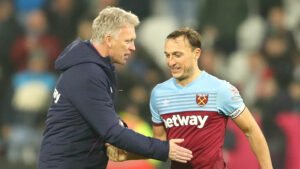 The Premier League will meet with captains and managers tomorrow to explain the finer details of Project Restart.

On Wednesday manager David Moyes and Captain Mark Noble will listen to plans to try to allay growing health fears during two crunch meetings but will also make it clear that if its plans are not accepted then the future of the whole game is in danger.

Among the questions that will be addressed is why it is important for the Premier League to resume next month in spite of players expressing their anger at a perceived rush to return. But, it is understood, one of the principles behind ‘Project Restart’ is to enact changes now that will be significant in dealing with the possibility of a so-called “second peak” in later in the year that could devastate the sport if plans are not already tested.

The players will also all be reminded that they will be part of an extremely strict testing regime, so only those who have tested negative are playing, with the Premier League promising to create the safest working environment possible. It has even been described as a “sterile bubble”. At the same time some players are uneasy at being treated in this way when other workers are not being given the same level of protection.

If players accept the changes then they will return next week by which time the next set of rules, the contact training protocols, will be ready to be discussed. The final stage, if all goes well, will be the return to play protocols for when matches resume.

The players will be told that they will not be forced to return and will need to provide written consent to show they understand the protocols with clubs carrying out rigorous occupational health risk assessments by Friday.