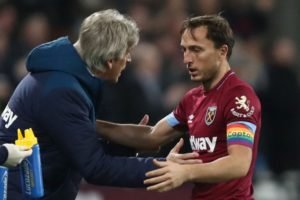 West Ham remain optimistic that Mark Noble could be fit for Saturday when the Hammers face Spurs at the London Stadium.  Noble suffered from a twisted ankle in the 3-0 defeat at Burnley before the international break but he has trained this week as battles to fully recover from his injury.

The skipper will face a late fitness but could be forced to sit on the bench for the start of the London Derby at lunchtime on Saturday.

Michail Antonio has made good progress in his recovery from a hamstring injury after three months out but is unlikely to be risked with a start but still has a good chance he could be included on the bench.

Manuel Pellegrini could bring back Jack Wilshere into the starting lineup if Noble is not declared fit enough to start despite the 27 year old playing just just 54 minutes of football in the past two months.